It is a Rosa plant of Rosaceae. It is one of the higher plants in China. It is countries as a "special medicine for scurvy". Erect shrub, about 1.5m high; Branchlets cylindrical, purplish brown or grayish brown. Leaflets 7-9, leaflets oblong or broadly lanceolate, flowers solitary in leaf axils, or 2-3 clustered; Bracts ovate, petals pink, obovate, fruit subglobose or ovoid, red, sepals persistent, erect. 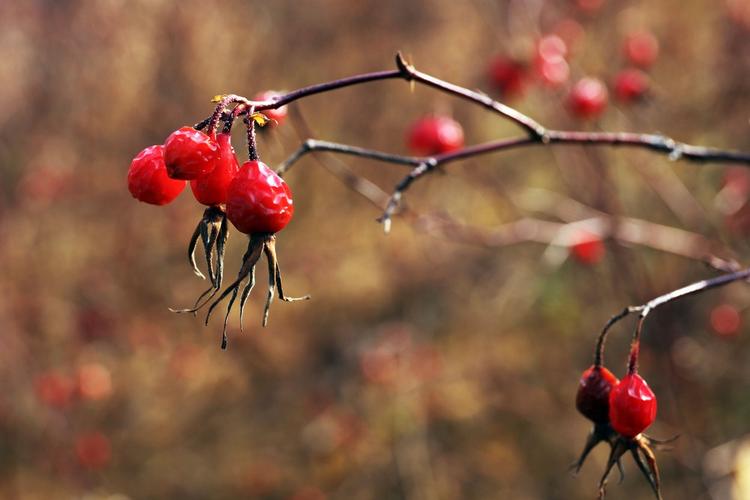 It often grows in open woodland or forest edge, and is resistant to barren and drought. It grows well in sandy beach, river bank, barren mountain and slope and on both sides of roads with low organic matter content.

It is produced in Liaoning, Shandong and other provinces. The natural Rosa Rosa fruit grows in the northern primeval forests such as Daxing'an Mountains and Xiaoxing'an Mountains in China, without any industrial, chemical and pesticide pollution. It is distributed in North Korea and the Far East of the Soviet Union.

The whole body of natural Rosa roxburghii is a treasure and has a wide range of uses. Not only the fruit has high nutritional value, but also the flowers, leaves, roots and seeds have utilization value. Confirmed by relevant experts at home and abroad; Rosa Rosa flower, which can extract Rosa Rosa essential oil, is sold well at home and abroad, and the price is higher than gold; It can extract pigment and essence for food and beverage; It can also be used as tea, and regular drinking can make sweat with flower fragrance. Leaves, which can be used to prepare tea, have the functions of strengthening the body, hematopoiesis and anti inflammation; The root can be used to make medicine, stop cough and phlegm, stop dysentery and stop bleeding; Seeds can be pressed for oil, used in cosmetics production, and can also be used in medicine, to treat skin diseases, colitis and various stones. Seeds and seed cakes can be used as feed for raising shrimp and chickens to improve the growth rate and egg production rate. Natural Rosa roxburghii is not only the raw material of various drinks, especially high-level health and sports drinks, but also a rare additive for food. It can also directly produce jam, jelly, preserved fruit and other foods. At the same time, it is also the raw material of medical and health care drugs. In addition, VC, pigment and essence can also be extracted from Rosa Rosa flower.

Through comprehensive research by more than 20 scientific research institutions in China, including the Institute of biophysics of the Chinese Academy of Sciences, the clinical testing center of the Ministry of health, the Chinese Academy of traditional Chinese medicine, and the Heilongjiang Hospital of traditional Chinese medicine, it is confirmed that the fruit contains flavonoids, organic acids, coumarins, ziitols, triterpenes, polyols, saponins, proteins, sugars, fatty oils, volatile oils, and 17 kinds of amino acids, including threonine, valine, isoleucine, leucine, methionine Phenylalanine, lysine and other seven amino acids that are necessary for human body but cannot be synthesized by themselves; It contains 28 kinds of elements, including 14 kinds of trace elements necessary for human body, such as zinc, iron and selenium, which are rich in biological activities. The content of zinc is very high. According to the test of the clinical test center of the Ministry of health, the content of zinc is 19.43 mg per 100 grams of fruit, which is higher than that of other plant fruits and is known as the "flower of life"; It also includes VA, VC, VE, VB1, VB2, VP β- Carotene and other vitamins. VC content was the highest. According to the test, the VC content of the edible part of each 100g fresh fruit is more than 6810 mg, and the highest is 8300 mg. According to its content, the VC content of Rosa Rosa was 220 times that of citrus; 1360 times that of apple; One gram of Rosa roxburghii fruit is equivalent to one kilogram of Apple VC content; 26 times that of black currant; 190 times that of strawberry; 213 times that of red bean; 130 times that of kiwifruit. 2-3 Rosa fruits are enough for the human body to have the need for VC day and night. The VC content of a can of 500g Rosa jam can meet the needs of a company soldier in the army all day.